Why do we wear makeup?

Throughout history, humans have always painted their faces, and what could reasonably be the birth of modern cosmetics began around 7,000 years ago in ancient Egypt. Cleopatra used lipstick made from ground carmine beetles, and the more mortal Egyptian women used clay mixed with water to colour their lips.
But why do we wear makeup? And how did it come about? And it’s not just the women — increasingly, men are putting it on too. Let’s explore the reason behind humankind’s obsession with what is essentially face-paint, among other things.

For imitation & self-confidence
According to a descriptive study at the Angeles University Foundation, most makeup wearers are influenced by their family members also choosing to wear it, or by friends and celebrities; models and artists on social media and TV. Most people actually wear it to enhance their own physical beauty, but not for the purposes of attraction. Makeup is a quick-fire way to enhance self-confidence, as if used correctly, it can create a clearer complexion, conceal blemishes, emphasize facial features, and make the person look younger.

The journal of Cogent Psychology reported on a study that revealed a correlation between women wearing makeup and exam success. In fact, wearing makeup was thought to be more promising when it came to high-grades attainment than listening to positive or study music. But this could also be because of the self-confidence that good makeup can help to provide.

Because of external pressures
One study released from the North-eastern University Press, found that women engage in “self-regulation” in an effort to avoid being punished by other women for not wearing makeup. This was backed up by a further study in The Journal of Social Psychology that revealed that women who wear makeup are perceived more positively by society. Women are also viewed as more professional, and judged as more likely to earn more money; to be healthier and more confident, and also to be more attractive by men. Women who fail to wear makeup are even sometimes judged to be in ill-health.

For creativity
Lisa Eldridge, the author of The Face of Makeup, has said that “after 20 years working as a makeup artist I can say quite confidently that women wear makeup for themselves”. She cites the playful and creative aspect, and even the fun and tactics involved in such choices. Eldrige admits she utilises a more “tribal” and “war-like” type of paint to make her more confident and to feel more powerful.
And this power isn’t just limited to man, as Rhiannon Lucy Cosslett writing for the Guardian has noted, even David Bowie used it for creative and re-imaginative effect.

To fulfil innate sexual instincts
In the realm of evolutionary psychology, scientists have determined that makeup is ultimately used as a form of subconscious sexual expression. Makeup enhances desirable qualities in women that are largely related to reproductive fitness, and especially in ways that are considered universal markers of attractiveness. Both facial symmetry and skin tone are thought to signal good health, and youthfulness indicates fertility.
Makeup that implies flushed cheeks, such as pink blusher, and red lipstick are thought to be symbolic of sexual arousal. One study revealed that women purchase more beauty-enhancing makeup during times of economic recession, presumably to increase their chances of finding a mate to help meet the cost of living in harder times. This phenomenon of wearing lipstick to enhance beauty is known as the “lipstick effect”. 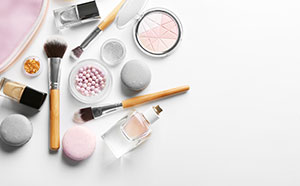 To send a message
To answer the question about why we wear makeup, we ultimately need to delve deeper into one of the fundamental questions of human behaviour — one that often escapes awareness as to its significance.
How we choose to model our appearance is determined by the forces of history — both cultural-specific views and the biology and emotions of the human organism. Research suggests that we actually transmit most of our messages through our body language, and not actually through words. Including over 1,000 different bodily gestures, and 250,000 facial expressions. In this context, makeup and its application is just another page in the “grammar of the face”, which has a universal cross-cultural relevance.

—
This guest article was written by Eliza Cochrane of Future In Beauty, an organisation that runs nail technician courses and eyelash extension training courses all over the UK.