When your pet is your ring bearer

27-year-old best friends Ivan Ho and Rachael Dudziak tied the knot at Carlton Towers, Goole, North Yorkshire in February 2019 and they couldn’t have had their day without ring bearer Jasper, their stunning rough collie!

Commenting on why Jasper had to be involved, Rachael added: “Jasper means everything to us. We even feel closer as a couple since he entered our lives. He’s much more than a pet, he’s part of the family which is why we decided he would be our official ring bearer”. 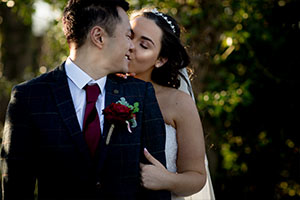 Ivan and Rachael met when they were just 16 at a concert in London and have been best friends ever since. It wasn’t until they were 21 that they became a couple and just three months in they travelled to China to teach for 8 weeks. Since then they have bought their first family home and introduced four-legged furry companion, Jasper. On 20th April 2016, Ivan surprised Rachael by getting down on one knee. Rachael comments, that it made her “the happiest person alive! After 5 years together I thought it would never happen, so it was a huge shock”.

The wedding itself was an intimate and personal affair with 60 guests at the ceremony and a classic, floral and romantic theme. The colour scheme was burgundy, navy, gold with blush and cream flowers. They had a magician, violinist, pianist and a cello but the most personal and unique aspect about the wedding was “Jasper! We couldn’t have had our day without our boy, sadly he couldn’t stay at the hotel with us, but we found a super doggy day care before we took him on our ‘mini moon’ in the morning” added Rachael.

Jasper was kitted out in a stunning tartan bow tie and matching lead to fit the colour scheme and Rachael’s sister and two nephews led him down the aisle to deliver the rings. Preparing him for the wedding Rachael said “Jasper’s HATES music so we took him to the venue a couple of times before the big day and left him with a very helpful member of staff before the rings were needed. I was apprehensive but it was the perfect moment and I’d recommend it to anyone”.

It seems Ivan and Rachael aren’t the only couple keen to have their dogs involved in their big day. Recent research from EUKANUBA found that almost half (46%) of British dog owners profess that their dog is key for the ‘paw-fect’ big day. Ring bearer proved to be the most popular role with 44% willing to trust their canine companions while one fifth of Brits (19%) wanted their pet pooch to walk them down the aisle and even one in eight (13%) hoped to have their pet as their best man. It also seems no couple’s wedding pics would be the same without their furry friend as 75% insisted their dog has to be in the photos. 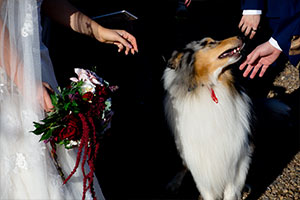 Ring bearer most popular role for a pet

For other couples considering getting their dogs involved in the wedding, Rachael simply says, “Do it”! She went on to add “make sure you’ve talked it through with your venue and have a solid plan and preparations in place. We had to change our plans a lot to make sure we were happy but I’m so glad we did as it was the perfect day and made all the better with our WHOLE family there, especially Jasper”.

Jasper is one of five EUKANUBA Live Life Well Ambassadors, who are demonstrating the difference truly tailored nutrition can make to dogs of all life-stages and how its nutrition supports optimal body condition for real dogs, living real lives in real homes. Since being on EUKANUBA, Jasper’s dental hygiene has improved and his coat is glossier than ever – perfect for all those wedding pics!