Getting married on February 29 was certainly a leap in the right direction for a Shropshire couple - despite fears that the worst flooding seen for many years around the venue might impact on their big day.

Jodie Evans and Richard Simmonds married at The Best Western Valley Hotel in Ironbridge on Saturday and despite the dreadful weather of recent weeks everything turned out fine - with the couple praising staff for being a ray of sunshine throughout!

They had been planning their wedding for about two years and chose The Valley as their ideal location - but one thing they couldn’t plan for was the persistent heavy rain which left the River Severn in full flood.

Jodie said: “The weather has been awful in recent weeks and we were concerned about access and people getting to The Valley, but the hotel came up with contingency plans, alternative routes and maps for everyone if the roads had still been closed.

“Fortunately, some of the roads around Ironbridge were reopened on Friday and remained open through Saturday so we had a window there to get guests in and out and enjoy the wedding. It was a great day and one we will always remember.

“Getting married on February 29 came about a bit by accident really, we got together on February 25th 2010 and wanted to get married on the 10th anniversary but that fell on a week day this year and we thought it would prove to be a bit awkward for guests making it to the wedding.

“We thought about it and decided to move it to the following Saturday which we thought was March 1. It didn’t cross our minds that it was a leap year and would actually be February 29 - but that 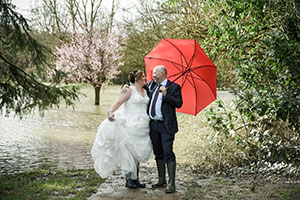 was alright and we thought it would be great.

“The only thing is, we will only be celebrating our wedding anniversary every four years, but I’m sure we will find a way around that!”

The couple, who live in Lawley, married in a civil ceremony with 125 guests attending on the day. Jodie, 40, is an NHS administrator at the Princess Royal Hospital in Telford and Richard, 54, works as a contractor for the Ministry of Defence. They will be honeymooning in the United States later this year.

“We wanted a laid-back stress-free wedding and The Valley staff were great all along. It’s been two years in the planning but we’ve really stepped things up, sorting things out, over the last month,” added Jodie.

“Our main concerns were obviously the weather but The Valley team were fantastic, calling us each day to keep us updated. We couldn’t have asked for more.”

Lisa Snape, Sales and Marketing Manager at the Valley Hotel, said: “Jodie and Richard have been fabulous and we were able to keep them informed about the flooding situation in Ironbridge and our contingency plans if roads remained closed.

“It was great news for everyone when roads were reopened on Friday and the flooding eased, if only temporarily, meaning the wedding could go ahead and everyone could enjoy a wonderful day.

“Ironbridge has featured heavily internationally with recent media coverage of the floods, it’s a memorable time being leap year and we were delighted to provide a wedding which will be long remembered.”

Rob Paterson, Chief Executive Officer of Best Western GB, said: “We are incredibly proud of the way The Best Western Valley Hotel has been such a pillar of their community during this awful time of flooding in Ironbridge and the surrounding areas.

“Lisa and her team at The Valley have shown the true meaning of hospitality, helping those in flooded homes get refuge, as well as delivering Jodie and Richard’s dream wedding day, despite not ideal weather circumstances.

“The Best Western Valley is a shining example of one of our 260 independent hotels throughout GB that consistently delivers over and above, amazing customer service to our guests.”