The recent findings from Sonos reveals that more than half of couple’s polled (57 percent) choose their first dance song based on the music they had listened to and reminded them of when they first got together, prompting *almost one fifth of British music lovers to say “I Love you” because of the music they heard out loud. 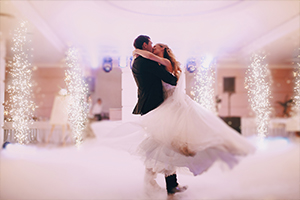 Over two thirds of Brits (69 percent) also agreed that couples that listen to music together are much more likely to stay together, because the more music played out loud definitely has its benefits, with *2 out of every 3 people knowing which song turns their partner on…could this explain the 36 percent that admitted to pretending to like a song because their partner loves it?

The pressure for the ultimate song selection on the big day can quickly start to mount for some couples as the significance of music in their relationship was deemed ‘important’ by 79 percent of Brits.

Half of Brits (49 percent) confirmed the songs they chose made their big day feel more special *with 7 out of 10 music lovers agreeing that the right music can make someone more attractive, which isn’t surprising as research shows that couples that listen to music out loud have sex more often than couples that don’t! Although interestingly, almost a third of couples admitted if there was a choice between music and sex in a relationship, they would be willing to skip the sex.

However, some loved-up couples (69 percent) admit to combining the two - music playing in the background when they get intimate. Whilst Marvin Gaye’s 1973 classic - Let’s Get It On - is STLL the number one song, which gets British couples in the mood for love, followed by Barry White’s My First, My last, My Everythingand Perfect by Ed Sheeran. 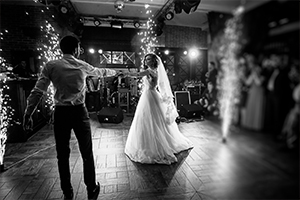 Vicki Pavitt, Relationship Expert and Co‐founder of Project Love, comments: “Music plays a huge role in people’s lives, whether you are single or in a relationship. These findings show the impact from the early days of dating - to the special wedding day and beyond! A clash in music tastes with a partner can cause some relationships to end on the wrong note - but honesty is key - they will want to know the real you.”

Shakira Payne, PR & Culture Manager, UK, adds: “Our latest research highlights the fun and minor faux pars that we can all experience when merging music tastes but whatever the individual tastes, having access to quality music sound makes the marital home sing. Whether a marital home or a home of any kind – Sonos and music is a match made in heaven.”

(Everything I Do) I Do It For You - Bryan Adams

All of Me - John Legend

Can’t take My Eyes off You - Andy Williams

I Don’t Want to Miss a Thing - Aerosmith

When a Man Loves a Women - Percy Sledge

Stand by Me - Ben E King

The Time of My Life - Bill Medley/Jennifer Warnes

What a Wonderful World - Louis Armstrong