What is it like marrying someone from a different culture?

Marrying someone from a different culture
By Charlotte Ricard-Quesada, Founder of La Féte

As long as I can remember, I’ve felt very drawn to Mediterranean and Spanish culture in particular, from my teenage summers there learning the language to my regular visits for Fería in Seville. Over a decade, I built a network of friends in the south of the country, became intertwined with their lives and thus, began dating: a pretty natural evolution, which tied me closer to my quasi-adoptive country. Things continued the same way until I met my now husband. An incredible, imposing and open-minded man who had big dreams and who would move to London within the first 6 months of our first date, set up by mutual friends.

As our relationship progressed and my partner’s life and career evolved, we noticed behaviours changing towards us. I was held responsible for all the professional and life changes he was going through, and rather than celebrating him and his success, they diminished it. This was our first (rather surprising) taste of differences in our families and circle of friends. Now, I am by no means generalising: many people in my husband’s life welcomed me with open arms and he still has very close friends back home that I absolutely adore, but we weren’t expecting the adversity that came from his southern, conservative circle. 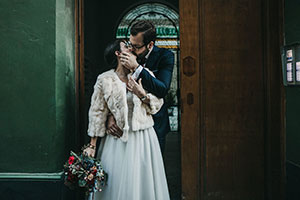 This was amplified with the wedding preparations. As opposed to my husband, I grew up in a very liberal, independent and maybe unconventional household, where we chose the people we wanted around us, whether they were blood relations or not. But for him, if you were related, that was the most important, even if you didn’t like each other as people. My husband is a very kind, dutiful person so always respected this even if he didn’t fully agree and I lambasted him for letting others take advantage. We learned a lot during our wedding planning process, even choosing to have two weddings to avoid any kind of conflict: a 260 person black-tie affair in Seville and a romantic 60 person event on the Atlantic coast of France. It was definitely a roller-coaster, revolving around our refusal to get married in a church, our choice of dress code, my husband’s choice of best men, who should be invited, etc. There was a lot of pain and hurt caused by people who simply didn’t understand our wishes and even told us that to them, our marriage was invalid and wrong as we weren’t married in front of God and in the way they were used to doing things.

Despite all this, we soldiered on and had the most magical weddings. I’m very thankful to have had the two events, but even though they were beautiful and very different, one was limited by certain conventions.

It was a tough process at times, but at the end of the day, we learned a great deal about people and still managed to make our dream happen. It’s definitely far from easy, but it’s worth every challenge.

What I learned from our experience

-    Difference in culture does not mean a difference in values
My husband may be from a different culture to mine, but we share the same fundamental values and morals, which is the key to any successful relationships. If you’re having difficulty with your partner’s family, remember this and see if you can find any common ground on core values.

-    Be patient and compassionate
I can’t stress enough the importance of patience and compassion. It’s easy to get impatient, stressed and sometimes even downright dismissive and petty when things aren’t going your way. Things have a way of working themselves out over time, so be as proactive as you can and don’t panic. Also, put yourself in your partner’s shoes and imagine what it must feel like for them to be pulled in two different directions: be kind to them, they’ll never forget it. 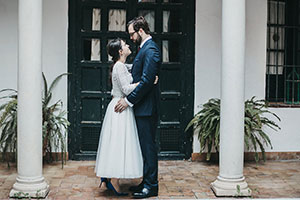 -    Listen and explain
As much as you might feel that you’re in the right and your partner’s circle are in the wrong, make sure to listen to what they have to say and pay attention: there might be a subtext to what they’re saying that you can agree on. I know that you shouldn’t need to explain yourself, but it goes back to being kind, so explain your reasoning. They might understand better and if not, at least you know you tried.

-    Make concessions but don’t lose yourself
I’m sure you know by now that marriage is about compromise. And it’s definitely accurate. But in your wedding planning process, you may not want to make certain concessions, so my advice is split the concession halfway and still make it work for you (unless it’s something key that you absolutely refuse to budge on, like the venue or overall style).

-    Don’t forget to enjoy the process and your big day
Despite the challenges, make sure to enjoy your wedding! It passes in the blink of an eye and you and your partner need to take it all in together. Don’t fall into the trap of tending to everyone and playing host: you’ll miss one of the biggest days of your life.