The Age Of The Groomzilla

The stereotype has long played that the soon-to-be bride will build out an intense beauty, hair and fitness regime in the build-up to their wedding day, however it seems men are now getting in on the act.

Beauty brand Procoal surveyed 1047 married men, to ask them about their pre-wedding arrangements, with some surprising results. To start with, 84% stated they personally plucked their eyebrows before getting married. A further 36% admitted to visiting a spa or salon in the month before their wedding day.

5% of men surveyed also admitted to trying micro-blading before the wedding day. The interesting thing about this, was the majority of these individuals were based in Liverpool (38 of the 52 responses stating they had tried microblading), which must now be the new home to microblading.

Just shy of 30% of men admitted to getting a spray tan before getting married, while several of them admitted to regretting this decision based on not usually spray tanning and getting the process wrong.

Very interestingly, 12 men from the survey admitted to tan touring so that they would look great on their honeymoon. For those who aren’t aware, tan touring involves contouring the self-tan to your face or body so it stays there on a semi-permanent basis, looking more natural but often looking bizarre if done wrong. 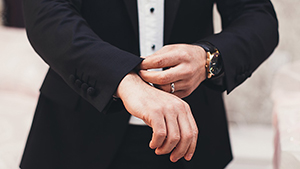 Following on from all this treatment, Procoal asked whether they argued with their best men during the wedding planning process and a hefty 91% admitted to having an issue. For all those that said they argued, 61% was over suits, 21% said they thought their best man didn’t help enough, 15% was about the stag do, with the further 3 stating ‘other’.