The rise of bride speeches

Wedding speeches, who’d give them? They wreck your nerves; you study endlessly beforehand and sometimes (don’t say it out loud) they’re not good. However, tradition is still routinely followed and that means the groom, father of the bride and the best man are usually the ones taking the mic to share outrageous anecdotes, flatter the bride and attempt to make the crowd laugh.
Over the last few years, with a noticeable renaissance in the rise of feminism, perhaps spiking after Meghan Markle took the mic at her own wedding, women are now delivering bride speeches.
In an industry which revolves predominantly around women, it makes logical sense that a bride should speak on her wedding day. The bride usually takes charge of the ‘wedmin’ and most of the planning beforehand, so they can do more than take compliments and let the men do the talking.
A recent survey undertaken by YouGov showed that a mere 16% of people believed that brides should speak on their wedding day, while 62% of people expected only the best man to give a speech, showing that while more women than ever before are giving speeches at their weddings, it’s still not expected of them in the same way it is of the men. 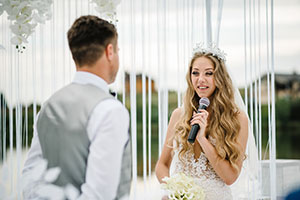 Why shouldn’t the bride speak for herself?

There are several reasons why they may still be reluctant to speak, including the fear of public speaking, or the avoidance of upsetting tradition. But with society constantly adapting to change, it’s time for new traditions, ones that focus more heavily on women and their involvement in the biggest day of their life.
Given how weddings have modernised in recent years, including same-sex marriage, why should men be the only ones who get to crack jokes, share embarrassing moments or deliver heartfelt sentiments on the big day? It is a day for two, and many women are increasingly taking a stand against their spouse speaking for them, regardless of tradition or expectation.
For brides, giving a speech at their wedding is the perfect opportunity to speak from the heart, and take their share of the limelight. If everything is equal and the bride wants to share why they’ve chosen this person to spend the rest of their lives with and most importantly, why they said ‘yes’, then get ready to listen. It’s also the only time that they’re going to have an audience so delighted to listen to hear them speak – so make the most of the opportunity!
On the week of International Women’s Day and with the rulebook routinely being ripped up it’s a time for empowering brides to stand up and speak, for new traditions – to do it your way.