Virtual Reality Wedding Video. I wonder what people see with those four words?

Some of us may remember tomorrow's world and a huge contraction sitting on your head with Wizards and R2-D2s  running around in clunky graphics.

VR has come a long way  since then, pardon if I get a bit geeky for a minute.

I have been working with Google the last 4 years doing a lot of pioneering work in 360 media. The Google cardboard project has made things much easier - now most people have smartphones and the film footage that I shoot and edit can be seen in 360º on a Smartphone and the same device with a simple Google Cardboard headset can you show the third dimension which is depth.

VR with what you have in your pocket and a £10 piece of cardboard. 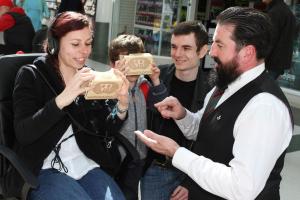 VR video for weddings is a unique way to connect not only the imagery but the ambience and the emotion of a wedding with friends and family far far away so much so that people are calling the experience immersive or immersion - just like being there. It's so easy - I do all the hard stuff  - people can just tap a mobile or click on a computer screen and move all around.

VR Video is more than just 360 video.  The sound is captured in spatial audio with 5 different microphones that can direct the viewer's attention and also record atmosphere. It Sounds complicated

and expensive but in fact it is does not cost as much you may think. For instance if you can share your 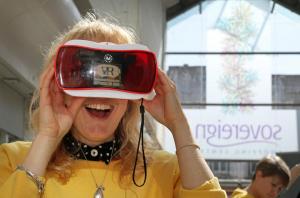 wedding privately or publicly with people on the other side of the world it has value and if you want to look back at your golden day at anytime what price can you put on that?

I use specially built cameras that look quite compact and surprisingly small, in fact cameras - when you consider a mobile phone - get smaller all the time. That's a tiny part of the process, getting the capture right is key then the work really begins in post processing and some of the stuff we can do is really really incredible. Technology is a wonderful thing but it's only as good as the person operating it - thankfully there are some areas of technology where people cannot be replaced - what does a machine know of the subtleties of art?

I was just recently at university lecture on VR by four people have never produced VR!

Bless them, they did a pretty job of reporting news and  background history but they all failed to sum up its key strength - which is itself. Someone said recently “VR is an enigma with a simple answer - for instance a rocket scientist could not explain VR to an ant but if the ant  saw VR it would know all about it.”

VR explains itself better than we can -  it's so simple it's brilliant.