The research showed significant differences between the honeymooners of the early 2010s and the more adventurous couples today! Now Yellow Zebra has created a full set of statistics, including original data, to showcase this new segment of honeymooners.

‘We want to show what the perfect honeymoon looks like for British couples,’ says Annabel Ford, Marketing Manager at YZ. ‘Contrary to what might be expected, we’ve found the new generation of honeymooners are more likely to prioritise experiences over traditional romance, with adventure even outstripping sex as the most crucial element to a post-wedding break! Travelling abroad together as a couple before getting married has become the norm, and beach holidays are becoming less fashionable year on year. We wanted to reveal the upcoming alternative trends so that couples looking for something a bit more special after their big day can compare themselves to other “adventure-mooners” and see what other options are out there.’ 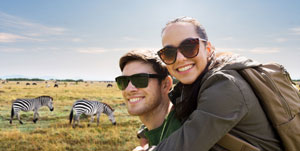 With South Africa, Tanzania and Kenya among the destinations recommended as ‘increasingly popular’ with couples, it looks as if the honeymoon industry itself could also be in for a shake-up, as the Insta-generation comes of marrying age. Brits now spend over a year planning for the ultimate dream trip, and are happy to spend up to 25 per cent of their total wedding budget on the honeymoon rather than the big day. A further 50 per cent want to be somewhere ‘exotic’ or ‘adventurous’, while newlyweds are happy to sit for up to six hours on a plane to reach far-flung destinations. Ford adds, ‘We are seeing a trend amongst couples who are happy to enlarge their budget for a truly unique experience, with honeymooners regularly booking safari trips that cost over £16000 and holidaying for two to three weeks.’

Full research from Yellow Zebra Safaris is available on request. Any couples looking for something a bit more adventurous can also find information on off-beat honeymoons at https://yellowzebrasafaris.com/holiday-type/honeymooners/