Weddings Go To The Dogs As Puppy Love Grips The Nation

In the past, all you needed for a fairy tale wedding was something old, new, borrowed and blue. However, now it seems pet pooches have been added to the list of must-haves, as half (46%) of British dog owners profess their dog is key for the paw-fect celebrations, which begs the question, has man’s best friend become man’s best man, too? According to a new survey from EUKANUBA1, the advanced pet nutrition brand, this is the case for one in eight (13%) British dog owners who hope to have their dogs as their best man.

In fact, one fifth of Brits (19%) plan to let their pet pooch walk them down the aisle, while almost half (44%) will trust them with ring bearing duties and three quarters (75%) insist their furry friend is included in the wedding pics.

Given the important role pets play in our families, it’s not surprising to hear that for a quarter of UK dog owners (24%) their four-legged friend would be guest of honour, while for 90% they are favoured over the in-laws and extended family members.

And it turns out the role our canine companions play isn’t limited to the big day itself, as a fifth of British dog owners (19%) involve their pooch in the proposal, while a quarter (25%) would even bring 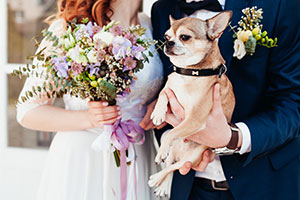 their dog on honeymoon with them.

With dogs becoming a pivotal part of the ‘fairy tail’ celebrations, it’s not surprising that dog friendly is a key consideration for a fifth of British pet owners (20%) when deciding on a wedding venue, with only cost (36%) and location (25%) ranked above it in terms of priority.

Similarly, pet owners plan to give their wedding breakfast a furry touch, with one in five (17%) ensuring there’s a suitable menu on the table for four-legged guests, while a third (29%) will ensure a healthy kibble is on offer.

“As a nation of pet lovers, it’s only natural that couples want to involve their dogs in a key milestone, such as their wedding day. Even this year’s Royal Wedding featured famous furry guests, with Meghan Markle's beagle Guy riding in style alongside the Queen on route to Windsor! However, it’s important that we take the necessary steps to ensure both our canine and human guests enjoy a happy and relaxing day.

“With so much activity surrounding you don’t forget that your dogs need high quality food to maintain energy throughout the day. EUKANUBA contains high levels of animal protein, including fresh chicken2, to keep their tails wagging throughout the big day. It’s also vital to have all the essentials on hand, such as water to ensure your dog stays well hydrated as well as plenty of familiar toys and bedding to ensure your four-legged friend is comfortable and has somewhere to sneak off for a lie down if they fancy a kip!”